SONGS of PROTEST: Important pieces of our history 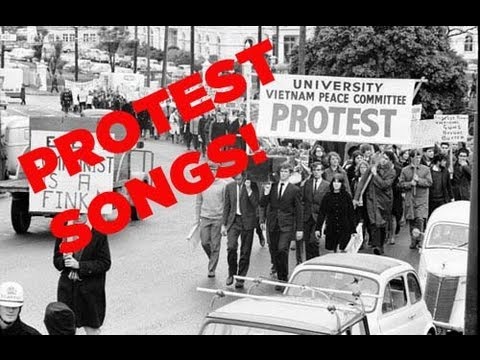 From the first time you heard your favourite band play live to that new song that keeps playing over and over in your head, music can evoke old memories or stir up new emotions.  Mankind has used song to spread ideas and messages to others since it’s beginning.  Sometimes the message is clear, other times we might really have to delve into our imaginations in order to understand what the artist is telling us. Our favourite songs are special to us because we can interpret the meaning to identify and reflect our own lives, past or present.  Then there are songs that we all relate to so much that they become the voice, the anthem of a generation. Either way, we can always be sure of one thing, music encourages us to feel. The Power of it cannot be denied. These 5 songs (in no particular order) bring attention to the way our society is or once was. Just in general or during a very specific and historic event.  These songs are a catalogue of our history, a history that will be around for years to come. One that has been recorded in one of the most powerful and effective ways to reach people….Music.  What protest song do you relate to??  What’s it about and why is it important to you? Share with us below or on our Facebook Page.

1. FOR WHAT IT’S WORTH – BUFFALO SPRINGFIELD

This song was inspired by an event that took place during the early stages of the psychedelic era in 1966, the year in which Buffalo Springfield started playing as the house band at the Whiskey a Go Go on the Sunset Strip in Los Angeles. According to the Los Angeles Times, annoyed residents and business owners in the district were pushing for a strict 10pm curfew and loitering laws to reduce the traffic congestion resulting from crowds of young club goers. This was perceived by young, local rock and roll music fans as an infringement on their civil rights, and on Saturday, November 12, 1966, fliers were distributed along the Strip inviting people to demonstrate later that day. Hours before the protest one of L.A.’s rock ‘n’ roll radio stations announced there would be a rally at Pandora’s Box, a club at the corner of Sunset Boulevard and Crescent Heights, and cautioned people to tread carefully. The Times reported that as many as 1,000 youthful demonstrators, including such celebrities as Jack Nicholson and Peter Fonda (who was afterward handcuffed by police), erupted in protest against the enforcement of these recently invoked curfew laws. Though often mistaken for an anti-war song, it was this first of the “Sunset Strip Riots” which inspired then Buffalo Springfield band member Stephen Stills to write “For What It’s Worth”, recorded about three weeks after on December 5, 1966.
Watch the original music video here via youtube – https://www.youtube.com/watch?v=gp5JCrSXkJY

2. THE TIMES THEY ARE A-CHANGIN’ – BOB DYLAN

Bob Dylan recalled writing the song as a deliberate attempt to create an anthem of change for the moment. In 1985, he told Cameron Crowe: “This was definitely a song with a purpose. It was influenced by the Irish and Scottish ballads …’Come All Ye Bold Highway Men’, ‘Come All Ye Tender Hearted Maidens’.  Dylan says about the song “I wanted to write a big song, with short concise verses that piled up on each other in a hypnotic way. The civil rights movement and the folk music movement were pretty close for a while and allied together at that time.” A self-conscious protest song, it is often viewed as a reflection of the generation gap and of the political divide marking American culture in the 1960s. Dylan disputed this interpretation in 1964, saying “Those were the only words I could find to separate aliveness from deadness. It had nothing to do with age.” A year later, Dylan would say: “I can’t really say that adults don’t understand young people any more than you can say big fishes don’t understand little fishes. I didn’t mean “The Times They are A-Changin'” as a statement… It’s a feeling.”

Watch music video from TV Movie ‘The Times They are A-Changin’ (1964) here via youtube
https://www.youtube.com/watch?v=e7qQ6_RV4VQ

This song has been interpreted as being about the American government and society during the Iraqi War. It begins by commenting on how the thousands of dead Americans and Iraqis are nameless to the average American citizen. The song expresses resentment with the corporate greed and corruption involved in the “rebuilding” effort, and shows how the average protester realizes that the pro-war money involved has more power than they can ever have. It also seems to point out the irony of the Christian right-wing feeling religiously justified in this war: “Can I get another ‘Amen’? There’s a flag wrapped around the score of men.” This is often considered an anti-American song, but on Green Day’s Bullet in a Bible DVD, Armstrong says, “This song is not anti-American, its anti-war.” Billie Joe Armstrong told Q magazine May 2009 that sometimes he doesn’t know where he gets his songs from. For instance, when he found himself singing “Sieg Heil to the president gas man” on this number, he freaked himself out. He said “It was kind of like, Where the f— is this coming from? It was taking an ugly picture and painting it uglier. The thing that justifies it is that it was true.”
Watch the original music video here via youtube https://www.youtube.com/watch?v=A1OqtIqzScI

Composed by Neil Young in reaction to the Kent State shootings of May 4, 1970, and performed by Crosby, Stills, Nash and Young.  Young wrote the lyrics to “Ohio” after seeing the photos of the incident in Life Magazine. It contained a vivid account and shocking photographs of the killing of four students by the Ohio national guard during a demonstration against the Vietnam war at Kent State University.  Sitting outside on a sunlit porch, Young took a guitar offered by Crosby and wrote a song about the killings, Ohio. “I remember getting nuts at the end of the song, I was so moved,” Crosby told Young’s biographer Jimmy McDonough. “I was freaked out because I felt it so strongly, screaming, ‘Why? Why?'”.  The lyrics help to evoke the mood of horror, outrage and shock after the shootings, especially the line “four dead in Ohio,” repeated throughout the song. “Tin soldiers and Nixon coming” refers to  the killing of the four student protesters and Young’s attribution of their deaths to Richard Nixon, even though the National Guardsmen were under orders from the Governor of Ohio, not the President. Crosby once stated that Young keeping Nixon’s name in the lyrics was “the bravest thing I ever heard.”

5. PINK FLOYD – ANOTHER BRICK IN THE WALL

Another Brick in the Wall is the title of three songs set to variations of the same basic theme, on Pink Floyd’s 1979 rock opera The Wall, subtitled Part 1 ‘Reminiscing’, Part 2  ‘Education’ and Part 3 ‘Drugs’.  Part II is a protest song against rigid schooling in general and boarding in the UK in particular. The single, as well as the album The Wall, were banned in South Africa in 1980 after the song was adopted by supporters of a nationwide school boycott protesting racial inequities in education.  The song was written as an attack against a specific type of learning, that which Waters endured as a child. The lyrics are quite specific to this effect, rebuking those teachers first described in “Happiest Days” who use “thought control” and “dark sarcasm” to mold the school children into mindless drones of society.  Waters wrote this about his views on formal education. He hated his grammar school teachers and felt they were more interested in keeping the kids quiet than teaching them. The wall refers to the wall Waters built around himself because he wasn’t in touch with reality. The bricks in the wall were the events in his life which propelled him to build this proverbial wall around him. His school teacher was another brick in the wall.
Watch the original music video here via youtube –  https://www.youtube.com/watch?v=YR5ApYxkU-U
Tell us what these songs mean to you, and feel free to share your own music!
(Facts and excerpts derived from different online information sites )