TOM’S TOP 10: The Rock Hall’s shame, Nickelback’s 15-year look back, and may you rest in peace, Professor Peart

1. We all know the Rock and Roll Hall of Fame is kind of a joke and not very “rock” at all these days, but let’s give a hand to the Class of 2020, shall we? Those honoured in the performer category are Depeche Mode, The Doobie Brothers, Whitney Houston, Nine Inch Nails, The Notorious B.I.G. and T. Rex, with a big party planned in Cleveland on May 2 and the whole thing shown live on HBO for the first time. If you’re up for a road trip, public tickets go on sale Feb. 27 at ticketmaster.com. Rock Hall nominees who missed out this year, with fan voting in play, are Pat Benatar, Dave Matthews Band, Judas Priest, Kraftwerk, MC5, Motörhead, Rufus featuring Chaka Khan, Todd Rundgren, Soundgarden and Thin Lizzy. But c’mon, put Iron Maiden in the Hall, dammit.

2. By now, most music fans know about the 2020 stadium tour that will see Motley Crue team with Def Leppard, Poison and Joan Jett. Before that, on March 30, Def Leppard will release a box set called “The Early Years 79-81,” a five-CD collection of songs recorded before the band truly sucked. Among the Virgin/Universal Music Canada-issued tracks is a Nick Tauber-produced version of “Rock Brigade”, which was originally pencilled as a single for the U.K. but never released – until now. Check it out below. Said singer Joe Elliott: “Well the fans asked, and we listened! Really excited to have our early years reworked with a load of rare material including the newly unearthed Live at the Oxford New Theatre, recorded on the 1980 UK tour …. It’s been a trip putting this box set together and I hope you all enjoy listening to it as much as we did working on it.” 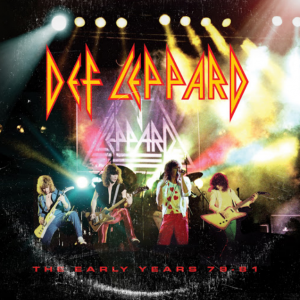 3. Speaking of nostalgia, Nickelback is back with an “All the Right Reasons 2020” tour timed to mark the 15th anniversary of that album, which scored a number of hits including “Photograph” and “Rockstar.” On a 46-date North American tour that gets going in July, the band will play the LP from start to finish, with Stone Temple Pilots, Switchfoot and Tyler Bryant. I was in the crowd when Nickelback was a club-level act in the mid-1990s, and saw firsthand how hard they worked to rise above the Grunge-y competitors. And not gonna lie: I’ve always really liked the song “Photograph,” so here it is, suckas. Don’t @ me.

4. Things sure are cooking or Billie Eilish. The alt-pop singer, 18, made Grammy history as the youngest artist to win in four major categories, and now she’s prepped to perform on the Oscar Awards telecast Feb. 9, live from Hollywood. Earlier this month, it was announced that Eilish will perform the title song to the 25th James Bond film, “No Time To Die,” due out in April, making her the youngest artist in history to write and record a Bond theme song. Then there’s a pending world tour and the just-released music video for “everything i wanted,” directed by Eilish and featuring her with brother Finneas, in an ode to sibling love.

5. Another young singer on the rise is Soccer Mommy, the “stage” name for 22-year-old Sophie Allison. Her sophomore album is called “Color Theory,” which aims to confront the ongoing mental health and familial trials that have plagued Allison since prepubescence. “I wanted the experience of listening to ‘Color Theory’ to feel like finding a dusty old cassette tape that has become messed up over time, because that’s what this album is: an expression of all the things that have slowly degraded me personally,” Allison says. “The production warps, the guitar solos occasionally glitch, the melodies can be poppy and deceptively cheerful. To me, it sounds like the music of my childhood distressed and, in some instances, decaying.” First up is the single “Circle the Drain.”

6. If you’re a vinyl-loving Springsteen fan, better get yer hands on the five Bruce LPs that Columbia Records will release on Feb. 21. Now re-released on vinyl are turn-of-the-millennium albums including “The Rising,” “Devils & Dust,” “Live in New York City,” “Live in Dublin” and “18 Tracks.”  Best among them is 2002’s “The Rising,” a two-LP package that, at the time, offered messages of healing and redemption in the wake of the 9/11 attacks, and saw The E Street Band re-unite in the studio for the first time in nearly a decade.

7. Capitol Records/Universal Music Canada recently trumpeted news of the debut of Bob Seger’s official artist channel on YouTube, with the premiere of a new lyric video for “Night Moves,” first of a series of such videos produced to highlight the Detroit-raised rocker’s classic hits. The channel will also premiere rare and classic Seger music videos restored for the first time in HD, and feature custom playlists of Seger’s catalog in HD-quality audio, fan-generated videos and some unreleased content. Also, fans can share their favorite Seger stories on the channel’s Community page.

8. In clicking through TV channels the other night, I hit upon “The Jerk” and laughed, and laughed some more. The Steve Martin classic is still comedy gold, I tell ya. So then I heard about the banjo-pickin’ Steve Martin collaborating with the Steep Canyon Rangers, a North Carolina-based band, on a song called “California.” Check out the clever little lyric video below. If straight-up comedy is more your thing, catch Steve Martin and Martin Short on a 2020 tour called “The Funniest Show in Town at the Moment.”

9. It’s no “Sounds of Silence,” the harmonies of which rival orgasm, but “Bridge Over Troubled Water” is among Paul Simon’s very best songs, and Jan. 26 marks the 50th anniversary of its release. To celebrate, Sony Music Entertainment’s Legacy Recordings is releasing “Live At Carnegie Hall 1969,” a four-song EP recorded by Simon & Garfunkel in November of that year during a two-night run at New York’s famous theatre. The stories behind the album and songs are revealed in “The Harmony Game: The Making of Bridge Over Troubled Water,” a documentary film directed by Jennifer Lebeau.

10. And finally this month, as the Barenaked Ladies once sang, “That was me in Grade 9”… listening to Rush in my basement, hitting pause on the cassette player every few moments in my attempts to learn Geddy Lee’s finger-numbing bass lines, and getting a real rush from those monster drum parts. Neil Peart was a hell of a lyricist and drummer, and apparently just a good man all around. The world has lost a musical genius. Rest in peace, Professor. You will be missed.

As an entertainment reporter, Tom Zillich has covered the Vancouver-area music scene for close to 30 years.
Tag him @tomzillich.

Check back here at Rock.It Boy Entertainment for his next Top 10.